Justina Kitchen and Lukas Walton-Keim both have a decent amount of international experience but feel like they are walking into the unknown when the Formula Kite world championships get under way in Italy next week.

That’s because the pair have been isolated from international competition for more than 18 months due to Covid-19. It’s also why they don’t really know how well they go as the countdown to the 2024 Paris Olympics comes into sharper focus.

Women’s and men’s kitefoiling has been added to the programme for the Paris Games and Kitchen and Walton-Keim are New Zealand top exponents.

Kitchen was fifth at the 2019 European championships, with Walton-Keim 26th in the men’s field, and together they finished third in the mixed relay, which had originally been selected as the kitefoiling event for Paris before it was separated out into individual competitions.

As many as 90 men in three fleets and 60 women in two fleets will compete at the world championships in Sardinia, and 16 fleet races are scheduled before semifinal and final racing. Fleet races are typically 12 minutes long with finals races only six minutes.

Walton-Keim has been in Europe for the past few weeks and recently finished seventh at the KiteFoil World Series event in Austria. The pair will also compete in the third round of the World Series starting in Cagliari on Thursday night (NZ time) before racing at the world championships starts on October 13.

“There’s a more professional vibe to everything and, for sure, the standard is higher,” Walton-Keim said. “It’s been quite a shock having been away for two years to see the level of riding throughout the whole fleet. Even mid-fleet is very high.

“I think we have done about as well as we could in New Zealand on our own. This trip is more about checking in with where we are in the fleet and taking as much as we can from it home with us.” 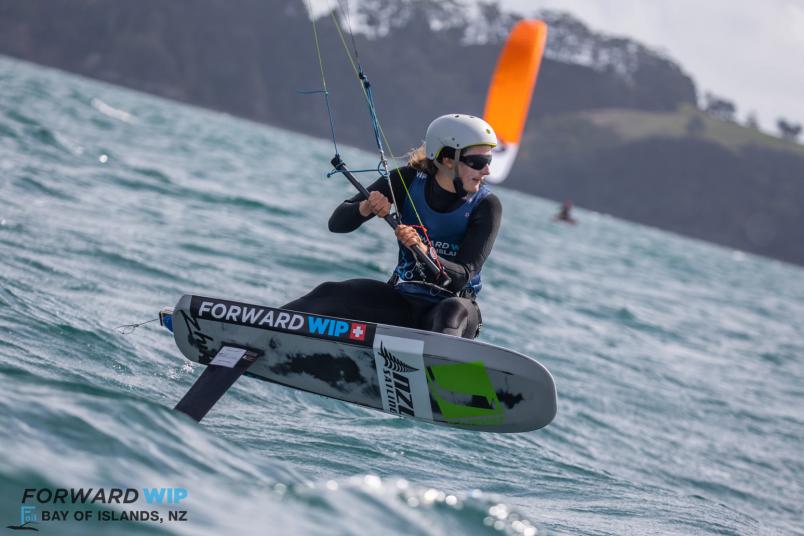 Kitchen has designs on a top-10 finish at the world champions but, like Walton-Keim, doesn’t really know where she stacks up. The pair have been testing and training together in New Zealand over the past 18 months and won every event they competed in.

The focus has changed a little with the change from a mixed relay to individual racing but Kitchen says the original format has played a significant role in the improvement of the women’s fleet overall.

“That was probably the biggest thing that came out of the mixed relay, that lots of the top men spent lots of time and effort bringing their female sailors up to speed,” she said. “That’s why the female fleet has improved so quickly.

“I don’t think we would have seen that if it had been an individual sport the whole way through. It would have been awesome [for us] to race as a team but it doesn’t really change anything because if we were going to do well as a team we both needed to be among the best in the world anyway.”

The warmup event in Cagliari is expected to deliver, in the words of Walton-Keim, “strong, stroppy offshore conditions” while Sardinia is likely to offer flat water and shifty conditions similar to what they experience in New Zealand. “If we have some variety, that probably suits us quite well,” Walton-Keim said.

They’ll certainly find out in the next couple of weeks.