Mattias Coutts teamed up with Cailen Rochford recently to finish on top of a top-class fleet of 40 boats at the 29er national championships in the Bay of Islands. Regional support officer Hayden Whitburn caught up with the former O’pen Skiff world champion to talk to him about his background and where he wants to take his sailing.

When did you start sailing and what pathway did you take?

I started in an Optimist when I was seven and Dad used to paddle around in the kayak. I remember doing a Sir Peter Blake regatta and not knowing where the course was after it had been explained to me for about 30 minutes. I sailed out to the wrong course and my boat filled up with water and I capsized. After that I remember not knowing where the start line was but, by pure fluke, I crossed the fleet on port.

I enjoyed sailing the O’pen Bic (now O’pen Skiff) more than the Optimist because it had more of a fun and group-sharing environment than the Optimist. I also liked the fact that the class went to so many different places, which was great fun and helped me build experience. The skiff, I think, is also a better boat to learn in and is much tippier, which helps people learn that the worst thing that can happen is you fall into the water.

Was the RS Feva a good stepping stone for the 29er?

I didn’t do too much RS Feva sailing but when I did I enjoyed it. It was a good boat to learn some of the basics of double-handed sailing, like communication, working together and hearing out the other person’s opinion on things. I think it’s a good learning boat to progress into a 29er.

You went over to the AC Endeavour event in Bermuda during the 2017 America’s Cup. What was the best thing about it?

The general scene and place was amazing. It was a great opportunity and one I was very lucky to experience. I remember it feeling really cool to represent New Zealand and Matthew Rist and I both really enjoyed watching the America’s Cup boats flying around the harbour. We also really enjoyed meeting and racing against the other people there in the Hobie. 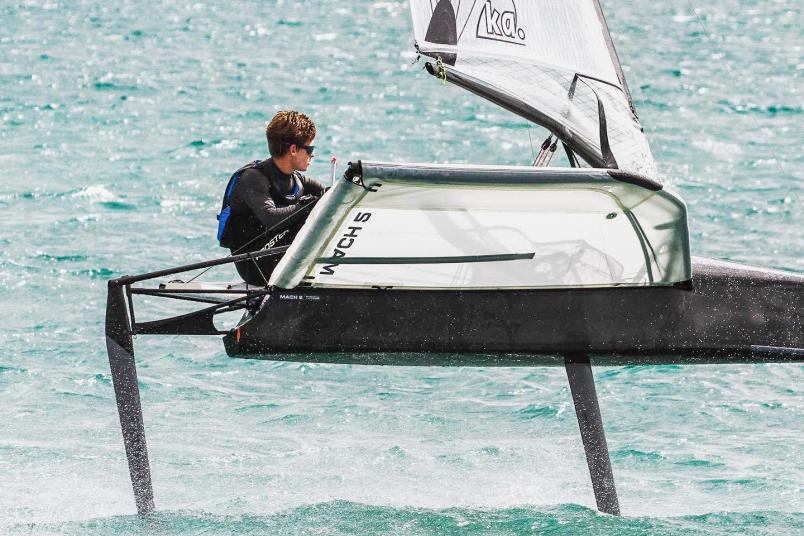 When did you team up with Cailen in the 29er?

Cailen and I have been sailing together for just under two years.

What was your main ambition leading into the 29er nationals and what sorts of things did you do in training going into the regatta?

We were trying to win the nationals.

We focused a lot on our tactics and light-wind speed before the nationals. We tried to go to every regatta or racing opportunity to test our speed and keep learning all the time and seeing things over and over.

We were sailing as much as possible, about four times a week, and also did lots of running because we were a bit too heavy for the boat. Unfortunately, Cailen had a back injury close to the nationals and couldn’t do too much training.

How did it feel winning the 29er nationals? Was this your first national title?

We were extremely exited as it was the first national titles both of us had won. We felt we had both worked really hard in the lead-up to the event both mentally and physically.

I’m starting to crew for Jake Pye and will be doing that for the next 6-12 months and we will have a big group of WASZPs sailing out of Manly training for the WASZP Games [world championships in New Zealand] next year. And hopefully a bit of moth sailing as well.

What are your future goals?

I want to win the Olympics in the 49er and win SailGP helming a New Zealand team. I also want to try to win the 29er worlds and youth worlds. Ultimately, I want to be the best ever.